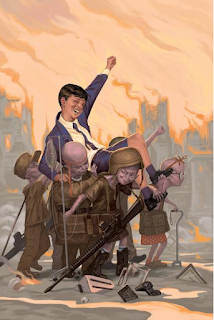 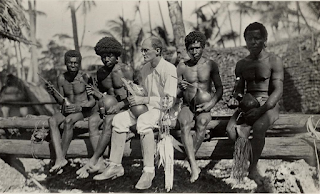 The most highly anticipated comics series of the year ends in the biggest way possible—the whole world burns away according to Tyler’s plan, and a new one he never anticipated is conceived. The meek inherit the Earth, and a final showdown proves that, finally, Roland Barthes is right! -- https://en.wikipedia.org/wiki/Fight_Club_2

Hm... I wonder what Barthes is right about, precisely.  I'll guess that maybe his book S/Z or more broadly his codes might be what is being referred to, but this doesn't resolve the mystery just yet.

Maybe (after looking around a bit more) what Barthes is supposed to be right about is that "there is no one possible meaning but instead 'a plurality of meaning or meaning as plurality'" -- from Searching for Meaning: An Introduction to Interpreting the New Testament, p. 100 -- quoting something from Barthes, but the exact reference is cut off in Google Books.  Perhaps the reference is to "L'analyse structurale du récit. A propos d'Actes X-XI" in Recherches de Science Religieuse 58, 1970, pp. 17-37, or Exégèse et Herméneutique, 1971, also reprinted in English translation here (in part).

Indeed, a plurality of meaning sounds somewhat Fight Club-like.  And come to think of it...

Perhaps the plural view is stereotyped and made extreme with the remark: "R. Barthes refuses to make any connection between the text and the reality which is imputed to it" (Structural Analysis and Biblical Exegesis: Interpretational Essays, p. 17).


In every new summary -- there are at least five in all -- a new route of destination and of communication is established. The text is, therefor, in its own structure, the center of an intense diffusion of messages. (Structural Analysis and Biblical Exegesis: Interpretational Essays, p. 18)

From Searching for Meaning it seems that -- at least potentially -- one of these layers is a phatic code.  But as remarked in Structural Analysis and Biblical Exegesis,


The story [Acts] in all the hierarchy of its levels affirms one and the same thing: communication is now possible, grace flows; the Gospel is offered to all.

And some terminology is introduced: "Barthes proposes to call diagrammatic such an agreement of the levels."

But whereas the text is structured,


Both the mythic and phatic codes are cultural, and intertextual – they are constituted by “certain types of deja-vu” (Barthes “Valdemar” 191), the already read. -- Essay: A Study in Textual Analysis: Angela Carter’s “The Company of Wolves”

Expanding that, I find Roland Barthes (Translated by Donald G. Marshall), “Textual Analysis of a Tale by Edgar Poe,” Poe Studies, June 1977, Vol. X, No. 1, 10:1-12, in which there is the following interesting quote:


The code of communication could also be called the code of the destination. Communication should be understood in a restricted sense. It does not cover all the signification in a text, still less its signifying; it designates only every relation which, in the text, is uttered as an address (this is the situation with the “phatic” code, which bears the burden of accentuating the relation between narrator and reader), or as an exchange (the narrative is exchanged for truth, for life). In sum, communication should here be understood in an economic sense (communication, circulation of commodities).

And near the conclusion of this essay, a now very Fight Club-like (and also Bakhtin-like) point: "Undecidability is not a weakness, but a structural condition of narration: there is no univocal determination of the utterance: in an utterance, many codes, many voices, are there, without prevalency...  one can no longer point out who speaks and when one only asserts that there begins to speak."

Popular posts from this blog

By arided January 11, 2017
I noticed this:
In 1878, Bergson became a French citizen, although he could have chosen English citizenship. He was accepted at the École Normale along with Jean Jaurès and Émile Durkheim. He discovered Herbert Spencer with enthusiasm, and studied under Félix Ravaisson and Jules Lachelier. - https://plato.stanford.edu/entries/bergson/ Bergson is kind of the great-grandpappy of Simondon-style thinking, it would be interesting to use Spencer as a common source (or at least reference point) with Malinowski, per the analysis at The plot thickens (with Herbert Spencer).

The SEP page above also makes this point:
Many philosophers today think that [Bergson's] concept of multiplicity, despite its difficulty, is revolutionary. It is revolutionary because it opens the way to a reconception of community.  Is it possible that Bergson's idea of multiplicity is a cousin of Malinowski's idea of phatic communion?  Something to follow up on at some point.
2 comments
Read more

By arided March 13, 2017
There is a lot of recycled material in this book and a lot that is off the point altogether. So a typical Zizek book. The one idea I found interesting is his explanation of street protests that turn violent, as well as the kind of thing that went on in Paris in 2005, as 'phatic' violence. That is to say, it serves the sole purpose of saying 'I'm here' and 'we're talking'. But Zizek doesn't take it far enough because in fact the phatic requires two interlocutors and its purpose is to keep open the lines of communication. So the obvious point he missed is that the police response is also phatic. By brutalising the protestors, they too are saying 'I'm here' and 'we're talking'. Moreover, if this in fact the case, then this type of protest action will not bring change because it is a routine exchange. -- from a three-star review of Violence, 2009 This is (perhaps) similar to what's going on in Netherlands recently.
Brainstor…
Post a Comment
Read more

paths in the grass: a visual metaphor for virtual architecture

By arided February 22, 2017
This image from my PhD thesis uses a minimal stereotyped image of a college campus as a visual metaphor to describe a space of emergent learning.  This idea is expanded upon in the "Patterns of Peeragogy" paper, which uses a similar metaphor: This image is of the University of Wisconsin-Madison, where I've been several times.  It still looks somewhat similar to the picture, though a bit more built up!
The concept here is that the common-place architectural structures that have emerged at the university represent meaningful "patterns" that apply in more general learning-and-production settings. Collegial and convivial peer support via remote collaboration or short-term meet-ups may fill some of the requirements of “student life”. Peeragogy can also happen in neighborhoods, and among persons sharing long-term co-habitation. While a traditional Dormitory may not be necessary, a shared rented or cooperatively-owned living/working environment could be an asset for …
Post a Comment
Read more